In Memoriam: B. John Garrick, Pioneer in Development and Application of Risk Sciences

The BYU College of Physical and Mathematical Sciences is saddened to announce the passing of alumnus and College Volunteer Leadership Council member, B. John Garrick. We are grateful for legacy and service. He will be missed.

B. John Garrick (M.S. ’62, Ph.D. ’68), an international authority on quantitative risk assessment and a distinguished adjunct professor of materials science and engineering at UCLA, passed away Sunday due to complications from a fall. He was 90.

Garrick first established his trailblazing theory on risk sciences in his Ph.D. thesis that contributed to building the foundation of probabilistic risk assessment, which is also referred to as quantitative risk assessment or QRA. The assessment offers a roadmap on corrective action to eliminate threats and best practices to manage low-probability, high-consequence events resulting from natural and man-made disasters.

Garrick’s illustrious career spanned over decades and started with a government job in nuclear energy, followed by academic pursuits and private consulting, culminating in eight years of a presidential appointment as chair of the U.S. Nuclear Waste Technical Review Board. He was a towering figure in the science and engineering community, especially on the application of the risk sciences to complex technological systems in the nuclear, space, defense, chemical, marine and transportation fields.

In addition to teaching at the UCLA Samueli School of Engineering, Garrick was also an adjunct professor at Vanderbilt University and a lecturer at the Massachusetts Institute of Technology. At UCLA Samueli, Garrick was a member of the Dean’s Executive Board and formerly the Dean’s Advisory Council. He was also a member of the Leadership Council at the College of Physical and Mathematical Sciences at Brigham Young University. 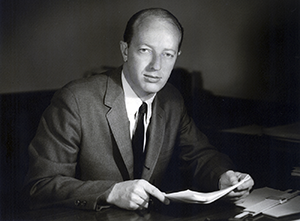 “John Garrick was a brilliant engineer, a loyal and generous Bruin, and a dear friend to our school and to so many of us personally,” said Jayathi Murthy, the Ronald and Valerie Sugar Dean at UCLA Samueli. “I will always remember his vision and creativity, and his single-mindedness in getting the Garrick Institute for the Risk Sciences established. We will all miss him very much, and our hearts go out to Amelia, his wife, and to his family.”

Garrick received a B.S. in physics from BYU in 1952. His first job after college was what he called a “bottom-of-the-grade” physicist at the Idaho Chemical Processing Plant, a federal research facility best known for nuclear energy research and which has since become the U.S. Department of Energy’s Idaho National Laboratory. It was there that Garrick became interested in risk sciences, especially as they applied to nuclear energy.

He attended the Oak Ridge School of Reactor Technology for a one-year, fast-track graduate course on nuclear energy. The school, which only operated for a few years, was affiliated with Oak Ridge National Lab with some of the country’s best scientists in the field as instructors.

Following Oak Ridge, Garrick joined the U.S. Atomic Energy Commission in Washington D.C., working in a group that reviewed the safety of the nation’s nuclear reactors. He left the commission for a job in Los Angeles at a small firm that provided engineering services to the nuclear energy industry. As his interests in risk sciences continued to grow, he decided to pursue advanced studies, receiving an M.S. in nuclear engineering from UCLA in 1962, followed by a Ph.D. in engineering and applied sciences in 1968. His doctoral thesis, titled “Unified systems safety for nuclear power plants,” laid out his theory on how to quantify risk — a concept later put into practice and one he continued to champion throughout his life.

After completing his doctorate, Garrick founded and led the first consulting firm of scientists and engineers, known as PLG, devoted to the development and application of quantitative risk assessment to both engineered and natural threats. The company conducted assessments for many of the nation’s nuclear power plants, chemical plants, transportation systems, space systems and defense systems. PLG was acquired by another company in 1993 and Garrick retired from the firm in 1997. He continued to work as an independent consultant.

In 1981, Garrick and longtime collaborator Stan Kaplan published an influential and most cited paper in the journal Risk Analysis on the concepts of probabilistic risk assessment. Titled “On the quantitative assessment of risk,” the paper formalized what is generally known as the risk-assessment triplet — What can go wrong? What is the likelihood of those events happening? And what are the consequences? 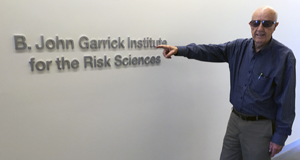 In 2014, Garrick and his wife Amelia gifted UCLA Samueli $9 million to launch the B. John Garrick Institute for the Risk Sciences. The umbrella organization of multiple research centers at UCLA focuses on saving lives, and protecting the environment, property and infrastructure from large-scale, natural and man-made threats.

“The complexity of risks to society and the environment has increased dramatically in the 20th and 21st centuries,” Garrick said in the announcement of the new institute. “We must meet the challenge of managing these threats with new thinking, methods, tools and applications. UCLA Engineering’s interdisciplinary approach to engineering and applied science, and its world-class faculty and commitment to public service make it the perfect home for the institute. I am thrilled to launch this exciting new enterprise to advance the risk sciences.”

According to Ali Mosleh, UCLA’s Evalyn Knight Professor of Engineering and founding director of the Garrick Institute, establishing the institute at UCLA reflected Garrick’s unparalleled dedication and commitment to the discipline of probabilistic risk assessment, or PRA.

“John Garrick was an extraordinary man, brilliant in mind and compassionate in heart. He was one of the founders and a global leader of the PRA discipline, and a formidable force in advancing the field in theory and practice,” Mosleh said. “Garrick was an active participant in many aspects of the institute and closely monitored the institute’s progress towards its stated vision and mission. While his passing marks the end of an era, his legacy will live through the work of those he mentored, particularly the new generation of researchers and educators at the academic institution he founded”.

He was elected to the National Academy of Engineering in 1993, one the highest honors bestowed on an American engineer, for “making quantitative risk assessment an applied science and a fundamental part of engineering design.” He was the chair of its Committee on Combating Terrorism and served on academy committees that examined space applications, automotive safety, the proliferation of nuclear materials and chemical weapons disposal. He served as the president of the Society for Risk Analysis from 1989 to 1990, and in 1994 received the society’s most prestigious award, the Distinguished Achievement Award. In 2014, he received the UCLA Samueli Alumnus of the Year award.

Garrick received the 2019 W. Bennett Lewis Award for Sustainable Energy and Development at the American Nuclear Society’s winter meeting in Washington, D.C. He was recognized for his contributions to the development of sustainable energy and for his lifelong leadership and efforts in the application of the risk sciences to complex nuclear systems.

He had been a member and chair of several National Research Council committees, including as vice chair of the Board on Radioactive Waste Management at the National Academies of Sciences, Engineering, and Medicine; and as a member of the Commission on Geosciences, Environment and Resources. He was vice chair and technical lead of the National Academy of Science’s Committee on Lessons Learned from the Fukushima Nuclear Accident for Improving Safety and Security of U.S. Nuclear Plants.

A registered professional engineer in California and a resident of Laguna Beach, Garrick was a fellow of three professional societies: the American Nuclear Society, the Society for Risk Analysis and the Institute for the Advancement of Engineering.

A prolific writer, Garrick authored the book “Quantifying and Controlling Catastrophic Risks” published by Academic Press; and was co-editor of the book, “The Analysis, Communication, and Perception of Risk” published by Plenum Press. He was also lead author of the handbook “Power Plant Availability Engineering” published by the Electric Power Research Institute. In addition, he authored several book chapters and published more than 250 technical papers and reports on risk, reliability, engineering and technology.

Garrick is survived by his wife, Amelia Garrick; his sons, Robert and John; his daughter Ann Garrick Albertson; five grandchildren and seven great grandchildren. He was preceded in death by his parents, two brothers and a sister.